By James Wood For Mailonline

A single care home where 11 out of the Isle of Man’s 15 coronavirus deaths have occurred has had its licence suspended – after its director blasted the government over a lack of PPE.

Abbotswood Nursing Home in Ballasalla had its license suspended on April 13 after nearly 40 residents tested positive for coronavirus.

Eleven people are now reported to have died at the home – with six confirmed in the last 24 hours alone – while another resident died while being treated at Noble’s Hospital.

Health Minister David Ashford revealed the news in a media briefing yesterday in which he also said his ‘heart goes out to the families and friends’ of the victims and announced there were now 307 confirmed cases on the virus on the island.

One in five Cumbrian care homes now infected with coronavirus

Cumbria was an early outlier in terms of infection rates of Covid-19 and has recorded 17 care home deaths since April 1, with 74 more where the virus is suspected to have been a factor in the fatality, according to figures released by the Cumbria Local Resilience Forum (LRF) on Thursday.

It said 23 out of 112 of the county’s care homes have had suspected or confirmed Covid-19 cases, around 20 per cent. There are approximately 3,400 people living in the county’s residential and nursing homes.

The virus case distribution is anecdotally thought to have been higher in the county due to the relatively older and more affluent local population, with people returning to Cumbria from half-term skiing trips in northern Italy, the epicentre of the outbreak in Europe.

A further 55 care home residents are confirmed to have Covid-19, with another 170 suspected cases, according to the LRF.

The county currently has the eighth highest number of infections per 100,000 of the population out of 150 local authority areas in England, according to Public Health England figures.

Areas with similar rates are all highly urban or cities. It is thought Cumbria’s higher figures are likely to converge with other parts of the UK as the virus spreads further.

Director and chief nurse Zandra Lewis had earlier warned about a lack of PPE at the care home.

She told Manx Radio: ‘We’ve asked for help from the relevant public health authorities to give us the appropriate PPE to look after the rest of my staff, let alone the residents.

‘And we’ve been given what I would call basic PPE. I’m really upset because any of my staff actually died from this, let alone residents, then I will feel the government has let us down.

She added: ‘Are we as a private nursing home, which has NHS residents in it, not as worthy as a hospital [for PPE]?’

The Department of Health and Social Care (DHSC) took over the running of the care home last week. DHSC chief executive Kathryn Magson said the reasons behind the decision were ‘confidential’ but it was for the ‘safety of the residents’, according to the BBC.

Some residents of the care home have been moved to a building on the Noble’s Hospital site while the facility is given a ‘deep clean’ but they be moved back once that is completed.

It comes amid growing concern over the impact of coronavirus on care homes.

The National Care Forum (NCF), which represents not-for-profit care providers, has estimated that more than 4,000 people may have died after contracting Covid-19 across all residential and nursing homes before April 13.

This is significantly higher than the official weekly figures released by the Office for National Statistics (ONS), which recorded 217 care home deaths connected to the virus up until April 3. 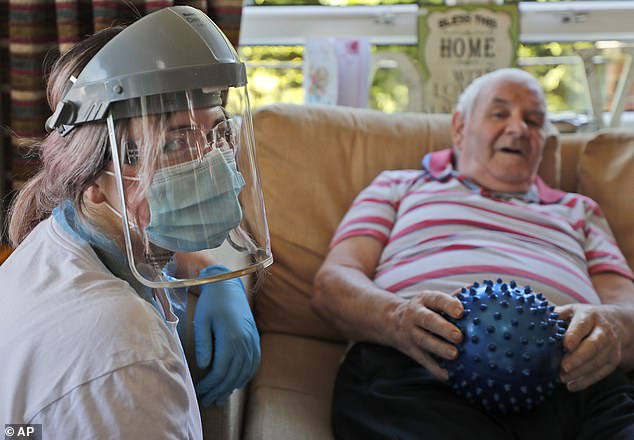 Director and chief nurse Zandra Lewis had earlier warned about a lack of PPE at the care home (pictured, a nurse in PPE speaks to a resident at the Wren Hall care home in Nottingham, Monday, April 20)

The NCF collected data from 47 care homes which support more than 30,000 people across the UK, accounting for 7.4% of the care sector population.

It found 299 confirmed or suspected Covid-19 deaths across those specific homes in one week between April 7 to April 13, which is almost three times the number of deaths in the preceding month, when they found 102 deaths between March 6 and April 7.

When scaled up to reflect the UK’s care home population, the NCF estimated that 4,040 people may have died of a coronavirus-related illness before April 13.

Nine people – including a nurse – have died in 10 days at a Dundee care home at the centre of negligence allegations.

Pitkerro Care Centre confirmed the fatalities after a former care worker revealed she had resigned in ‘disgust’ at the conditions she was forced to work under.

She has reported Pitkerro to the Care Inspectorate, which confirmed it was ‘considering all information’ carefully

Operator Hudson Healthcare has strenuously denied any wrongdoing, stating it had followed national safety guidance ‘every step of the way’.

Managing director Samuel Maierovits said: ‘We want to be clear: we have an enormous responsibility, so we should be held accountable for our actions.

‘However, there’s a difference between accountability and shouting ‘fire’ in a crowded theatre; some of the misinformation being shared is just plain dangerous, and is preventing us from doing our jobs.’

While the death of a nurse at Pitkerro was confirmed as coronavirus-related, the possible link of Covid-19 to the deaths of eight residents is still being assessed by GPs. 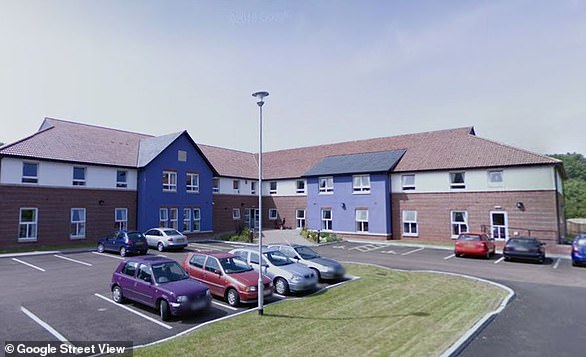 ‘Death is a constant part of care home life but it doesn’t make any of these losses any easier to deal with,’ said Mr Maierovits.

‘Our thoughts are with all of the families and friends of those who have passed on; as we fight this virus together, so too we mourn together.’

GMB Scotland, which represents a significant number of staff at Pitkerro, hit out at Hudson Healthcare last week after receiving what it described as ‘very disturbing’ information about its management culture.

Organiser Drew Duffy said it suggested the home was ‘ignoring public health guidelines and compromising the health and safety of staff and service users alike.’

More staff have since come forward to speak to the Tele, including Lee Blake, who contacted the Care Inspectorate.

She claimed there was an ‘atrocious’ lack of PPE for staff, with carers being asked to wear one apron and one pair of gloves for an entire 12-hour shift.

Dirty PPE had also been discarded on a trolley left in a corridor, which Hudson has since apologised for and is investigating.

In response, Mr Maierovits said Hudson was being distracted from its primary focus of providing the best care for residents by a ‘constant barrage of criticism in the media and online’.

He added: ‘We know this is an extremely difficult time for so many people and anxieties are running high. That’s why, so far, we have taken a conciliatory approach.

‘We will continue doing this as we think collaboration and transparency will lead to the best outcomes, but we are now considering all options because of the threat to our staff and residents, including legal action.’

Mr Maierovits said Hudson had followed Health Protection Scotland’s guidance of the use of PPE, implementing change ‘as quickly as possible’ when amendments were made.

He added: ‘We are doing all we can to protect our residents and staff.

‘We know that people are concerned and completely understand. However, we have to be able to do our job.

‘We are working closely with the local authority, Health Protection Scotland and Care Inspectorate to ensure we are following the official guidance, and will continue to do so.’

The Care Inspectorate said it understood this ‘is a really worrying time for people who experience care, their loved ones and families and for those who work in care’.

A spokesman added: ‘Care services across Scotland are working tirelessly under very challenging circumstances to care for people.

‘The Care Inspectorate is working closely with care providers, health and social care partnerships, care industry leaders and the Scottish Government to ensure services get the support they need during the pandemic.

‘Concerns have been raised with us about this service, we are in close contact with them and we are considering all information given to us carefully.’